“But the one who prophesies speaks to people for their strengthening, encouragement and comfort.” 1 Corinthians 14:3

Words can be weapons. Words can wound, humiliate and inflict pain far greater than any physical violence. Words can cause anger, declare war and destroy relationships. But just as potent as they are as weapons, words can also heal wounds and make peace. They can be soothing to those in grief and they can offer hope to those in despair. Indeed, well chosen words have a power and a beauty that can project eternally.

If words are so powerful, why don’t we choose them more carefully? It seems that 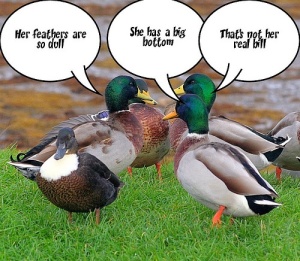 our culture de-sensitizes us to the poison of gossip, rumors and de-edification. We have all been in that situation; sitting in the break room with co-workers as they ‘discuss’ the personal and private affairs of someone else. And it can be easy to get sucked into the conversation by even offering our own opinion about that person. But Orrin Woodward says, “As soon as you start throwing mud you dig yourself a hole.”

It wasn’t until I started associating with the incredible LIFE leadership community that I realized how powerful our words really are. Orrin Woodward, Chris Brady, George Guzzardo and all of the founders developed a culture of edification. It was something I had rarely experienced before! Instead of listening to others talk negatively about others, I was surrounded by people who only encouraged, uplifted and talked positively to and about others. I remember Orrin saying, “if it is not uplifting don’t give it light.”

In proverbs 11:25 it says, “He who refreshes others will himself be refreshed.” I read this great story (author unknown) that really shows us how powerful our words are.

Two men, both seriously ill, occupied the same hospital room. One man was allowed to sit up in his bed for an hour each afternoon to help drain the fluid from his lungs. His bed was next to the room’s only window. The other man had to spend all his time flat on his back.

The men talked for hours on end. They spoke of their wives and families, their homes, their jobs, their involvement in the military service, where they had been on vacation. And every afternoon when the man in the bed by the window could sit up, he would pass the time by describing to his roommate all the things he could see outside the window.

The man in the other bed began to live for those one-hour periods where his world would be broadened and enlivened by all the activity and color of the world outside. The window overlooked a park with a lovely lake. Ducks and swans played on the water while children sailed their model boats. Young lovers walked arm in arm amidst flowers of every color of the rainbow. Grand old trees graced the landscape, and a fine view of the city skyline could be seen in the distance. As the man by the window described all this in exquisite detail, the man on the other side of the room would close his eyes and imagine the picturesque scene.

One warm afternoon the man by the window described a parade passing by. Although the other man could not hear the band, he could see it in his mind’s eye as the gentleman by the window portrayed it with descriptive words.

Days and weeks passed. One morning, the day nurse arrived to bring water for their baths only to find the lifeless body of the man by the window, who had died peacefully in his sleep. She was saddened and called the hospital attendants to take the body away. As soon as it seemed appropriate, the other man asked if he could be moved next to the window. The nurse was happy to make the switch, and after making sure he was comfortable, she left him alone.

Slowly, painfully, he propped himself up on one elbow to take his first took at the world outside. Finally, he would have the joy of seeing it for himself. He strained to slowly turn to look out the window beside the bed.

It faced a blank wall.

The man asked the nurse what could have compelled his deceased roommate who had described such wonderful things outside this window. The nurse responded that the man was blind and could not even see the wall. She said, “Perhaps he just wanted to encourage you.”

Think of the last time someone encouraged you – whether it was a compliment, a pep talk, an inspiring story, a genuine smile or a warm hug. How did it make you feel? Now think of the last time you encouraged someone else – how did that make you feel? What if more people focused on edifying and encouraging others – setting their egos aside and putting their focus on loving others. It makes such a difference in the bond and relationships we have with people. I believe the more we edify and build others up, the more we grow in our relationship with Christ.

Here is a great video to encourage us as we go out and change the culture with our words and actions:

I thought this might be fun, please take a moment to give a compliment to someone you care about in the comments section below – make sure to state their name and how you know them and then refer them to this posting so they can read your comment. Your encouraging words will go such a long way.

“Let no corrupting talk come out of your mouths, but only such as is good for building up, as fits the occasion, that it may give grace to those who hear.” Ephesians 4:29

14 thoughts on “Your Smile Lights up a Room”